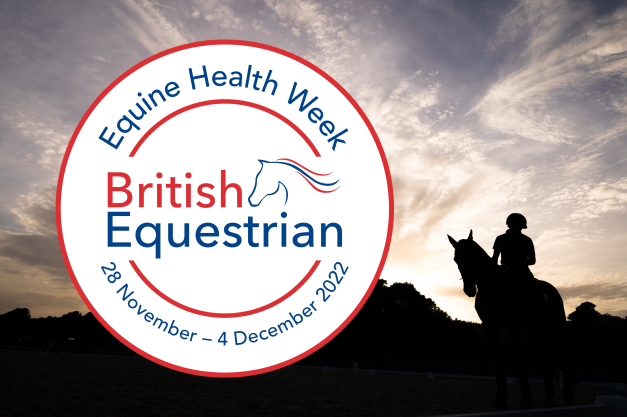 As part of our commitment to promote the highest standards in welfare, British Equestrian is excited to launch a new initiative in Equine Health Week. Running from 28 November to 4 December 2022, the week will feature educational content across our social media channels from leading veterinary surgeons, many of which sit on British Equestrian’s Equine Infectious Diseases Advisory Group (EIDAG). The week is aimed at everyone who interacts with equines – whether you ride occasionally at a centre, have your own horse or run a bustling yard, everyone has a part to play in the health, wellbeing and welfare of our partners.

Based around the theme of ‘reducing disease risk together’, there’s a packed seven-day programme of daily social media posts. We’ll be featuring a ‘disease of the day’, where some of our common – and not-so-common – conditions will be put in the spotlight. There will also be top tips to promote good health management and biosecurity at home and when out competing, and vet talks covering the principles of vaccination, the fight against disease and protection against parasites.

A highlight of the week will be the launch of the EIDAG’s latest publication, ‘Reducing disease risk together: advice notes for venues’, by the group’s Chair, Celia Marr, on Saturday 3 December. The handbook will be a vital tool for venues hosting equestrian gatherings at all levels to help reduce the risk of infectious disease spread. The guidance follows on from the Group’s comprehensive ‘Advice notes for British Equestrian member bodies and organisers’, first published in April 2021.

An outline content plan for the week (topics and experts maybe subject to change):

Chair of British Equestrian’s EIDAG, Celia Marr commented: “Ensuring our horses are healthy and happy is a constant duty and a responsibility we all share – whether you’re an owner, groom, yard manager, practitioner, organiser or venue, we all must work together. One of the biggest threats we face is the risk from disease and I’m delighted to be bringing a week where we can provide education, advice and debate in a bid to help mitigate the danger.

“The 2019 equine influenza outbreak in Britain and the equine herpes virus epidemic of 2021, which shut down European competition, serve as reminders of the importance of good practice and we’re hopeful this week will give guidance and raise awareness for those responsible for horses. We’re also looking forward to launching our handbook for venues, which will be another tool in our campaign for good biosecurity across the equine industry.”

Equine Health Week will become an annual feature in the British Equestrian calendar, with a different focus each year but the common aim of raising awareness and educating everyone to help with equine welfare considerations.